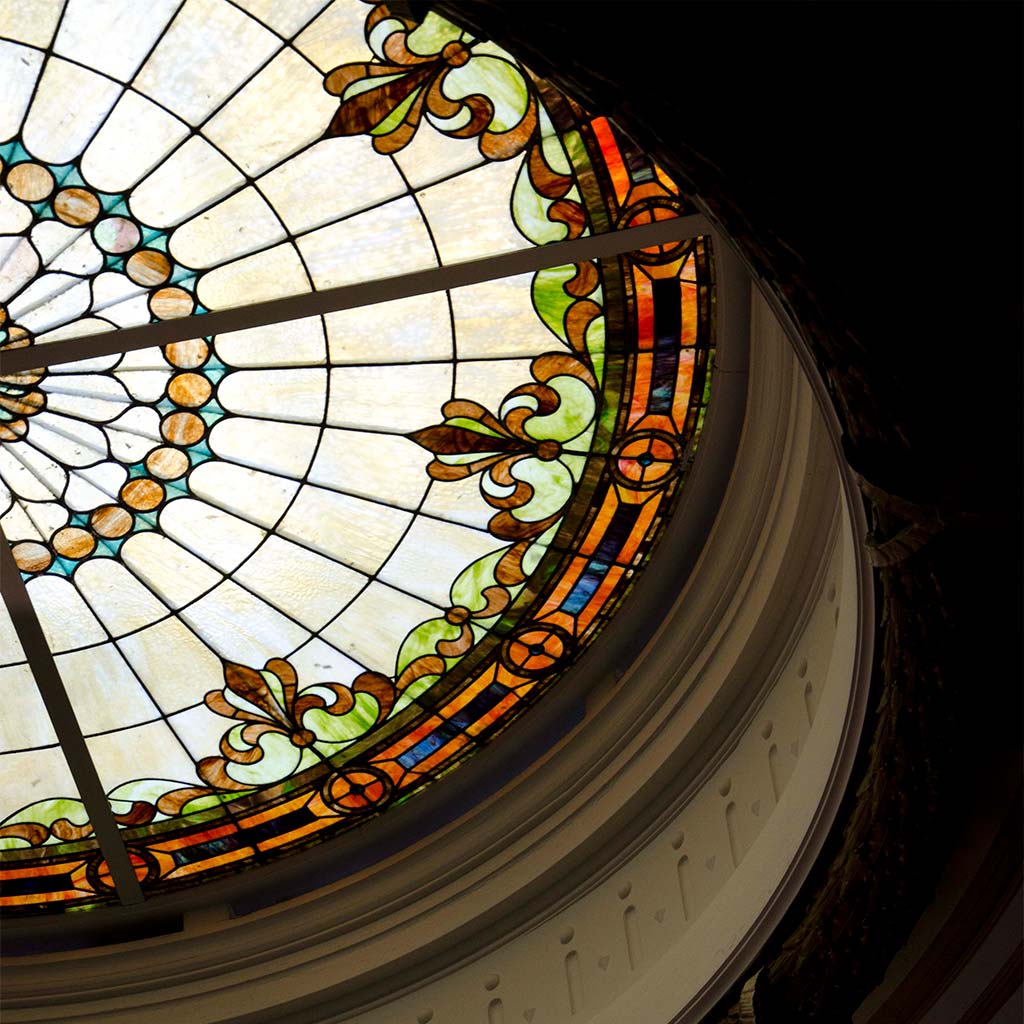 If there is one thing Bill Hayes knows like the back of his hand, it's how to build strong relationships. He knows that if you build on trust, even at a small rural institution, you can then grow that enterprise into a formidable player in a larger market.

Hayes started his business career in 1977, right after mustering out of the U.S. Coast Guard, at a small Mifflin County bank. He had a 1971 diploma from Lafayette College as well, but he started as a trainee, worked his way up from teller, to loan officer, and eventually, CEO of Kish Bank. Kish is now a major Pennsylvania regional bank that provides a full range of banking, insurance, wealth management, and travel services.

That's why he was intrigued when asked to become a Juniata Trustee more than a decade ago. "I felt there was a strong alignment between Kish and Juniata because of our focus on creating strong community partnerships. In particular, Juniata's efforts to support economic development in the region, first through President Tom Kepple's leadership, and now through President Jim Troha, resonated with me," Hayes says.

Over Hayes' first years as a Trustee, Kish Bank was a consistent supporter of various College educational initiatives. Bill and his wife, Connie, were inspired to contribute in a more personal way to Juniata's success when they began to see the growing importance the College was placing on elevating the Juniata College Museum of Art.

"When (Museum director) Kathryn Blake joined Juniata, we saw this as an important step in the College's elevated focus on the Museum. We were especially intrigued by the integrated approach she was taking to bring the museum into the Huntingdon community. It's not only sharing an important art resource with the community, it really represents the celebration of a wonderful architectural jewel on the Juniata campus," Hayes says.

The couple also was taken with Blake's approach to incorporating students into the day-to-day work of the art museum. "I'm very impressed with how she's tried to include students in the process of selecting and presenting the museum's exhibitions," says Connie, who serves on the advisory board of Penn State's Palmer Museum of Art and has been involved with Delaware's Winterthur Museum. "I think it's wonderful that she's pointing the way to potential careers for students."

The central change to the infrastructure of the museum and the focus of the Hayes' gift will be the design and installation of a "visible storage" facility in what is now the painting studio. That large room with its original woodwork on the main floor will be transformed into a central, climate-controlled, optimally designed area where the College can store the 800-plus artworks in the permanent collection when they are not on active display.

Blake will meet with facilities experts, architects and senior administrators after this magazine goes to press, but she's envisioning a glass-enclosed space where classes can view artworks in storage, and students can work in public view to prepare objects for exhibition.

Currently, the permanent collection is stored in the museum's basement, which is below ground level and could make the paintings, prints, and other art susceptible to water damage during floods or a catastrophic rain event. In addition, the cramped stairways to and from the basement, which were constructed in 1907, make accessing the basement and moving art up to the gallery area an adventure.

"The stairs make it difficult for students and faculty to view the artwork and bring up larger works; some modern pieces in the collection can't fit down the stairs at all," Blake explains. "Right now, when we need to move larger art pieces into the gallery we have to carry them outside—which is not good for the art or for anybody."

Once installed into the new space, the visible storage area will give students another means to see what is in the 800-plus-piece permanent collection while providing faculty easier access to art that can illuminate lessons in history, literature, chemistry, and other courses. "If (historian) Doug Stiffler is teaching his Japanese history course and wants his students to see some prints from the time they're studying, this is the perfect model for that kind of interdisciplinary use." 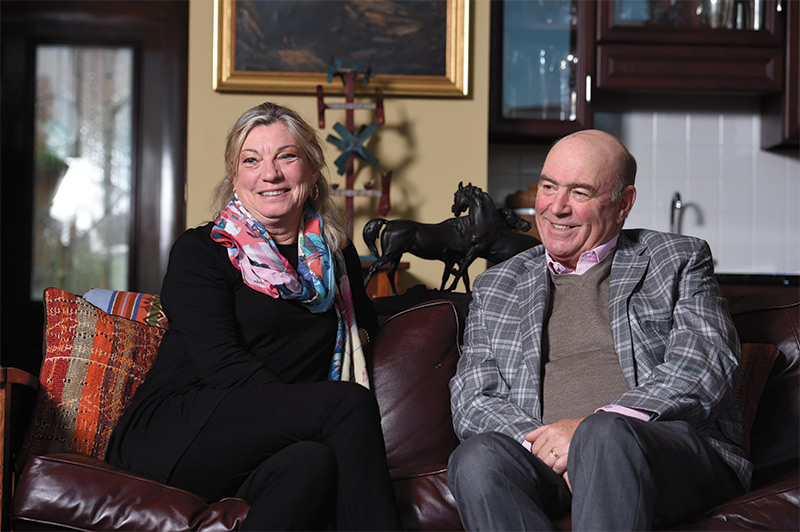 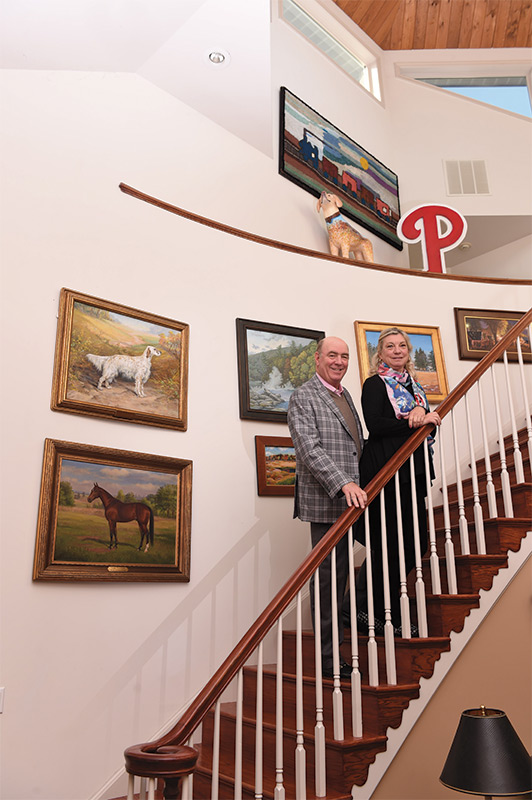 "We were especially intrigued by the integrated approach Kathryn Blake was taking to bring the museum into the Huntingdon community. It’s not only sharing an important art resource with the community, it really represents the celebration of a wonderful architectural jewel on the Juniata campus."Bill Hayes, CEO, Kish Bank, Juniata Trustee

Key holdings in the painting collection include American landscapes from the Hudson River School, still lifes and portraits; small-scale European genre scenes of the 17th through 19th centuries; a collection of 18th- to 20th-century portrait miniatures; and Modern and Contemporary works.

Although the Museum of Art renovations cannot start until the Kepple Studio Arts Building is completed and the five new art studios are outfitted, the construction of that building will free up space in the museum's basement for museum and student related activities, including exhibit preparation and storage outside of the permanent collection.

One of the most important facets of an art museum's operation is collection management, including how to take care of the many pieces of art that are not on display to the public. To date, Blake has just completed a Collection Management Policy and last October oversaw the installation of an environmental monitoring system for all the major spaces in the museum. Only the design and installation of a modern storage facility remains for the Juniata College Museum of Art to join the ranks of great regional art museums in central Pennsylvania.

"Bill and Connie understood immediately why this storage system is so important and that it represented a link between their son's dedication and our needs," Blake says.

The Hayeses too have a deep connection for art that is obvious the moment visitors go through the front door of their State College, Pa. home. Artwork and folk paintings from almost every period adorn every wall and paint-decorated Pennsylvania German chests and furniture are displayed throughout the home. The décor reflects Connie's interest in art and antiques, and Bill's interest in Pennsylvania history and folk art from the local central Pennsylvania area.

But a lot of people who love art and admire art museums never get involved in donating to help bring a rural museum into the major leagues. In fact, Bill and Connie Hayes ultimately decided to donate to Juniata's museum to honor the life and career of their late son, William Parker Hayes Jr., known to his family and to everybody else as "Parker."

One thing to know about Parker Hayes is that his mother wouldn't let him go to Juniata. "It was too close to home!" she protests, with a wide smile. So he attended Dickinson College, where he graduated in 1995 with a degree in history and American studies. He had an internship in the state capitol, where he had a chance to do some research into some Civil War battle flags. "Parker was always interested in history and artifacts," recalls Bill Hayes. "I remember him looking through our copies of Antiques Magazine when most kids would be reading comic books."

That curiosity would serve Parker throughout his career. After interning at museums as an undergraduate he knew that he wanted to advance the preservation and exhibition of artifacts and work in a museum environment. His next move was to enroll in SUNY Oneonta's prestigious Cooperstown Museum Studies Graduate Program, where he was able to receive his postgraduate degree while also gaining experience at Cooperstown's Baseball Hall of Fame and the New York State Historical Society Museum.

He published his master's thesis upon his graduation in 1997 entitled Drawn Home: Fritz Vogt's Rural New York, an examination of the life and work of a 19th-century itinerant folk artist who had previously been undocumented. Following graduation, Parker's first job was in the very small Airmen Memorial Museum in Suitland, Md. The site is focused on the contributions of U.S. Air Force enlisted personnel. Parker's job was writing historical publications on aspects of the Air Force until he came across information on one particular Air Force pararescue specialist named William Pitsenbarger. Pararescue specialists were tasked with extracting wounded from combat areas or other rescue missions. In 1966 while stationed in Vietnam, Pitzenbarger volunteered to rescue an ambushed Army unit. He loaded nine wounded men for evacuation and provided medical attention for those left on the ground before the area was overrun. He was posthumously nominated for the Medal of Honor for his heroism but the medal was downgraded to another medal, the Air Force Cross.

The story caught Parker's curiosity and he kept pulling on the threads of the airman's story. Eventually, he personally interviewed 12 survivors, later writing "the interviews were some of the toughest and most draining experiences I have ever had." Collating his interviews and other information, Parker forwarded a Medal of Honor recommendation to the Pentagon. After a long process (in fact, Parker had moved on to another job at the Holocaust Museum) Pitsenberger was awarded the Medal of Honor in December 2000.

Parker moved to Washington, D.C.'s Holocaust Museum and in 2001 accepted a job as project director for the Smithsonian Institution's Traveling Exhibitions, which was focused on developing complete museum displays from the Smithsonian's vast storage facilities built around a topic or personality that museums across the country could purchase and install. "Parker would create the exhibition from the Smithsonian collections and then he and his colleagues would travel to the museums to mount the show," Connie explains.

Parker was in his dream job at the Smithsonian (so much so that he had previously turned down a curatorial job at the Baseball Hall of Fame to stay there) when, on August 2, 2009, at the age of 36, he took a nap after a softball game and never woke up. A cause of death was never finally determined, but Parker Hayes left a powerful legacy of appreciation for art, for history and for materials preservation and exhibition that would survive well after his passing. It will now be a legacy that will be perpetuated at Juniata College as well.

"Parker was able to get great experience in college and graduate school and we are very supportive of the possibility that Juniata's Museum of Art can become a greater level for success for Juniata students as well," Bill says.

Bill and Connie not only have contributed to the museum storage project, but also are working on an endowed internship in the museum studies program in Parker's name. "He would always call us to tell us about what he was researching," Connie recalls. "Finding this way to remember him and his passion for history and museums seems like a fitting remembrance for Parker." 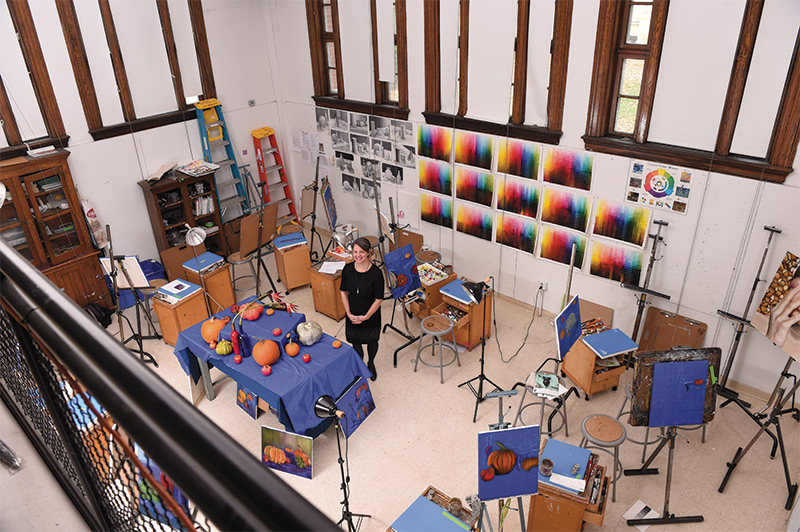 "If (historian) Doug Stiffler is teaching his Japanese history course and wants his students to see some prints from the time they’re studying, this is the perfect model for that kind of interdisciplinary use."—Kathryn Blake, director of Juniata College Museum of Art