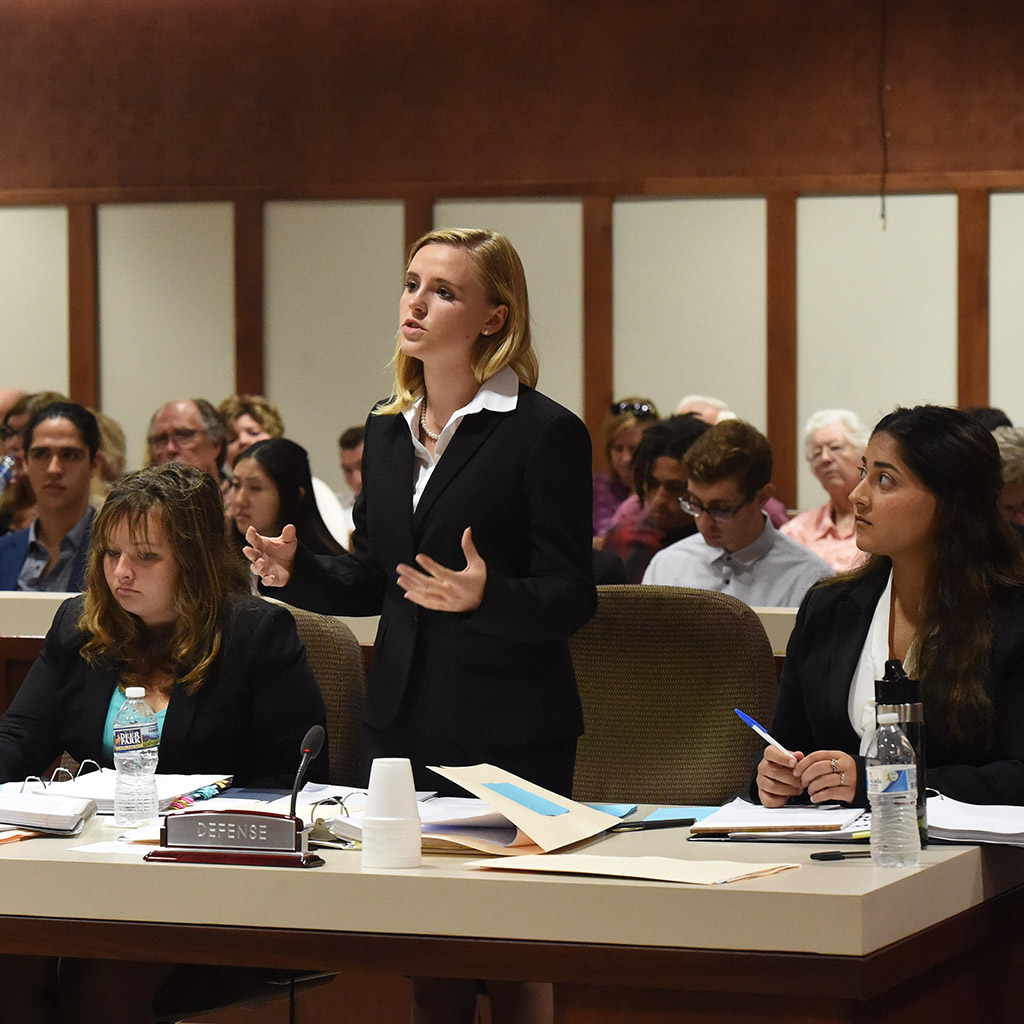 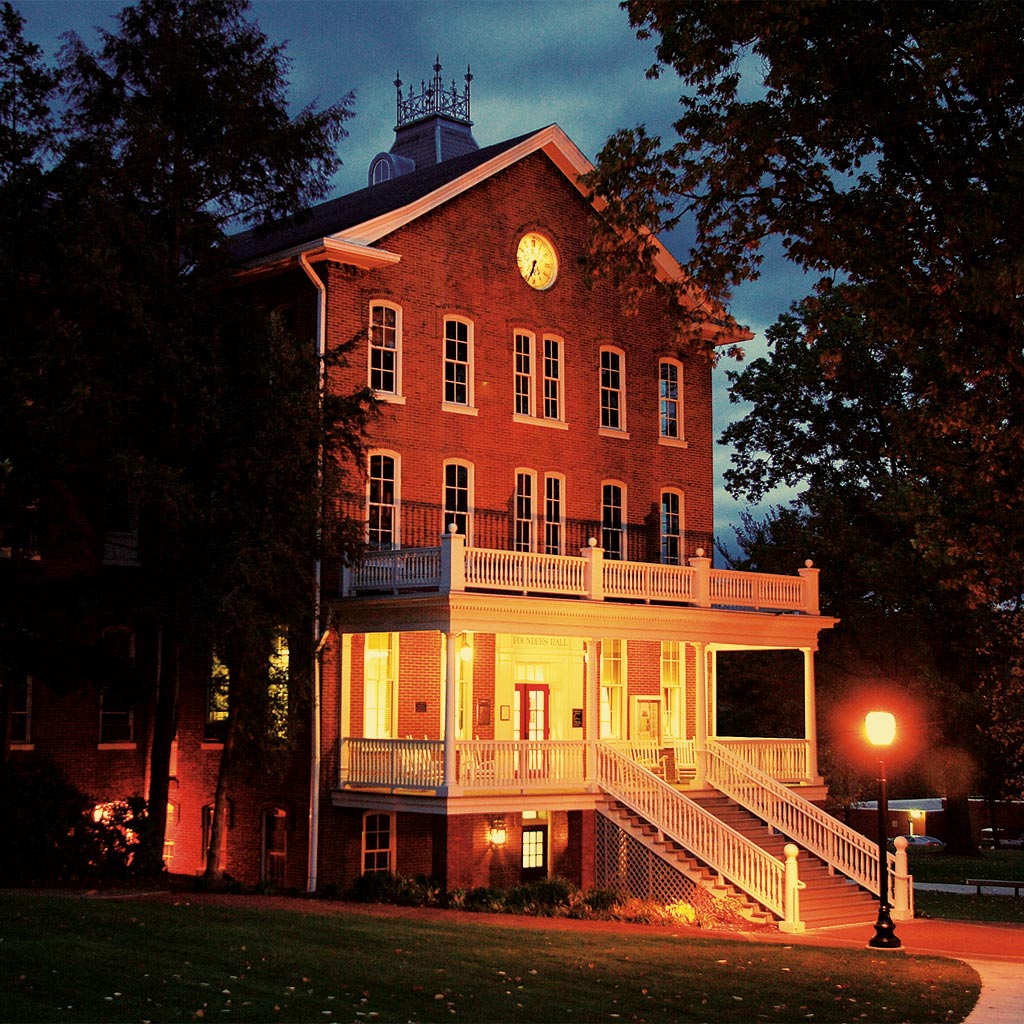 When she first moved to Washington D.C., in the mid-1970’s, Jo Ann Bowman ’75 caught the eye of Nina Hyde, then the fashion editor for the Washington Post. Bowman was taking a bike ride through Georgetown and decided to stop for ice cream. She was wearing a pair of gym shorts she had just tossed on, borrowed from her then-boyfriend, Bruce Moyer ’74. Suddenly Hyde and a Post photographer appeared, snapping photos and curious about her exercise apparel.

“I insisted it wasn’t fashion,” Bowman recalls. “It was just clothes I’d borrowed,” Bowman recalled. But in that moment, and later through the photograph of her that appeared the next day in the style section of the Post, a new trend in casual clothing emerged, and Bowman became a momentary fashion icon.

Fast forward roughly forty years to the 2018-2019 academic year for another unexpected instance of being at the right place at the right time. Bowman and Moyer, who married in 1979, made a gift last year to help the College get started with a mock trial team. Mock trial competition pits teams of students trained in legal advocacy against one another in real-life trial situations, trading the role of plaintiff and defendant. In its very first season, the Juniata team rocketed to the national level of mock trial competition, a stunning debut for a team that fast-earned recognition through wins over Syracuse, Columbia, Bucknell, and other veteran teams.

The swift march to triumph is satisfying, but Bowman and Moyer remain focused most on the learning value of mock trial competition.

“Advocacy skills are important in achieving everyone’s personal and professional goals,” said Moyer, a lawyer-lobbyist in Washington, D.C. “They involve all parts of our brain, the logical and emotive. Through mock trial, Juniata students are acquiring skills that will serve them the rest of their lives.”

Moyer and Bowman’s decision to support the new venture at Juniata represented a new phase in their decades-long support for the college. Each has chaired the Alumni Council. Both are dependable volunteers in the JC-DC alumni club and have recruited and mentored many Juniata students.

Their gifts have established an endowed scholarship, supported various building efforts and the Juniata Scholarship Fund, and helped the Baker Institute for Peace, where Bowman sits on its advisory board. The couple has made gifts every year for decades.

Their financial support for mock trial at Juniata also stems from Moyer’s longstanding personal relationship with Juniata’s mock trial coach, Dave Andrews ’74, since their student days. Andrews became Juniata’s general counsel and coach of the mock trial team in 2018, after a successful law career in Pennsylvania. His mock trial leadership has been an indispensable ingredient in the success of Juniata’s two mock trial teams in their first year. While at Juniata, Andrews and Moyer were closely involved in government issues, both on campus and statewide.

“Dave and I helped to create the Pennsylvania Student Lobby, organizing college students across the state to lobby Harrisburg,” Moyer says. The group lobbied about issues ranging from state funding of higher education to tuition levels to the drinking age in Pennsylvania.

During their freshman year, the duo also worked on the congressional campaign of a candidate who lost to Pennsylvania Congressman Bud Shuster on his maiden run.

“We went down to visit Bud Shuster after he was elected, and we did something that I would strongly advise people never do,” Moyer says. “We cautioned him that we were going to kick him out of office,” Moyer recalls wryfully. “We soon became wise enough to never repeat those words again to the Congressman or his son,” Moyer quipped. The younger Shuster, who succeeded his father in Congress and held office for 18 years, was instrumental in securing funding to help build the energy-efficient residence halls at Juniata’s Field Station on Raystown Lake.

While at Juniata, Andrews became student body president and Moyer served as his campaign manager. Among the contentious issues they tackled were the growing pains of the new curriculum the College started to implement in 1971 (that “new” curriculum produced what we know now as the POE). They also advocated for a student voice on the Board of Trustees.

“They ultimately succeeded in that quest,” Bowman said. “Today there are student representatives on the Board, and Bruce and Dave got an additional voice when they became adults and got on the Trustees.”

Moyer has been a trustee since 2011 and Andrews served on the board from 1999, including time as Chair, until his election to Emeritus Trustee in 2015. The two were friends years before Bowman entered the picture.

“I was only at Juniata my senior year,” Bowman says. She transferred to Juniata after returning from a study abroad year in Switzerland as an Ohio State student. “I did not want to go back to flat-earth Ohio after Switzerland, I knew about Juniata because I was Brethren, and I checked it out.”

The couple met during Bowman’s senior year, when Moyer remained after graduation to work in the College’s enrollment office. At the end of her senior year, at a lecture the late comedian Dick Gregory gave on campus, Bowman says “I noticed a man in front of me and he noticed me.”

Not long afterward, they each moved to the Washington D.C. area, where Moyer pursued his law degree at George Washington University and Bowman pursued a career in international development (and not fashion), including managing human resources for Chemonics International, a large foreign aid contractor. They raised two daughters, Ashley and Brittany ’09, who both are pursuing health-related careers.

Delightful coincidence continues to follow Bowman and Moyer. Last year when they were on campus for the public launch of BELIEVE: The Campaign for Juniata, the couple asked to meet Nick Guillermo, ’20, the first student recipient of the endowed scholarship the couple had established. Their long conversation that fall afternoon went longer than expected, with Nick sharing details on his New York background, his journey to Juniata and his past two years on campus.

Perhaps the most suprising fact? Nick was relishing his extra-curricular learning as a a witness on Juniata’s new mock trial team. 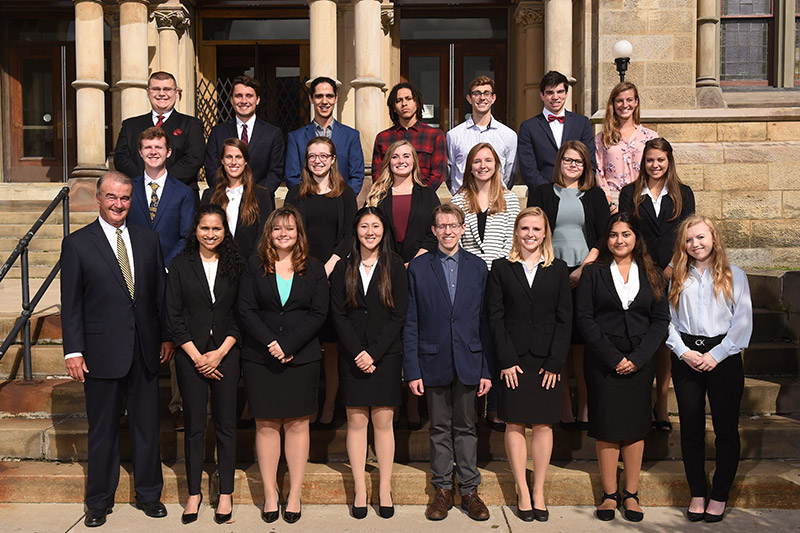 The 2018-2019 Juniata College mock trial team, in their first year of competition, earned a bid to the opening round of the National Championship Series in Long Island, N.Y.Photo by J.D. Cavrich 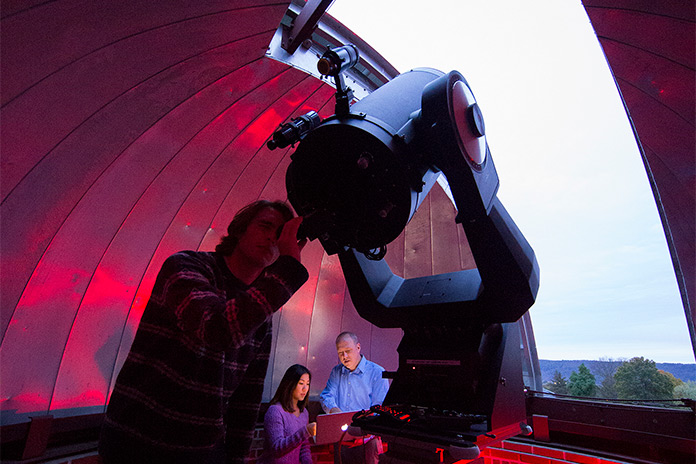